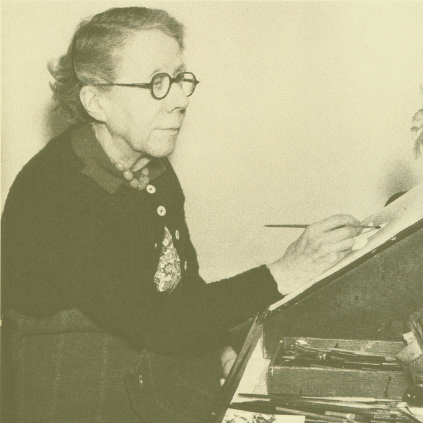 So-called ‘high’ art – painting, sculpture – has been dominated by men, some of whom have pointed to women’s absence in these lofty places as evidence of their lack of ‘genius’. When women turn to other media, wax, wool, shells and so on, this is denigrated as mere craft. It’s an old argument, and it’s still going on.

During the conversation Naomi talks about two very different women artists of the Georgian era, Mary Delany (1700–1788) and Mary Linwood (1755–1845). You can find out more about the lives of these women at Naomi’s website.

Diane’s wearable artworks can be found at dianegoldieartist.com.

Artist Nellie Roberts (1872–1959) was the self-taught daughter of a clock repairer from Brixton, south London. Her 4,500 paintings, created during a 56-year career painting watercolour representations of award-winning plants for the Orchid Committee of the Royal Horticultural Society, were and are still highly prized in the field.

At a time when hundreds of awards were given annually, Nellie’s paintings provided a permanent record and helped reduce controversy created by the early duplication of names for the man-made hybrids. Her award paintings are held in the RHS Lindley Library and remain an invaluable resource for the Orchid Committee.

An exhibition of her work held in September 2019, in the street in Brixton, south London, close to where she lived, informed a new and appreciative audience to her work.

Naomi talks to Naomi talks to current orchid painter to the committee Deborah Lambkin and Tracey Gregory, who organised the exhibition, about this remarkable and little-known woman.

Previous Post: « Why Lie? The Antics of Teenagers Elizabeth Canning and Princess Caraboo
Next Post: Maria Branwell, Mother of the Brontës & A Poem by Sarah Fyge Egerton, 17th-Century Feminist »